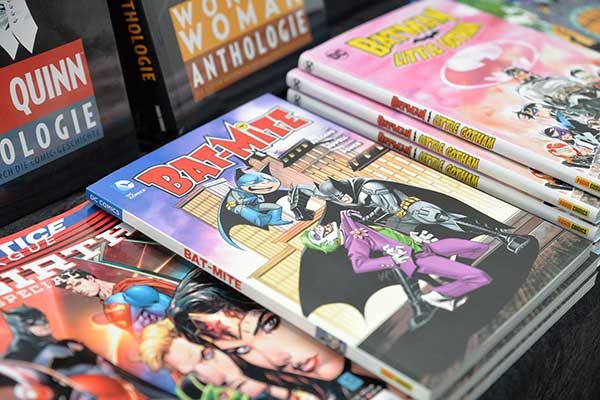 Some people see it as a handful of paper, others see that it’s just as valuable as a diamond ring. Comic book collecting has been a popular hobby since comics started becoming normalized in the early 1900’s. With so many limited prints being published over the years, it’s no surprise that some editions are worth more than others. Due to this fact alone, there’s now a dedicated community of collectors who now turn to pawn shops for more rare issues.

What makes one comic book worth more than another? Like with many other valuables such as jewelry and trading cards, there are a great number of factors that determine the issue’s final value. Even having a basic knowledge of these traits will help you in your search for collectible comics when you visit your local pawn shop.

How a Comic Book is Valued

The major characteristics of every comic book are the condition, rarity, demand, and grade. An expert pawnbroker is well-versed in how to point out these factors and the comic’s standing in each category.

Things to Look For

Even if you’re not sure how to identify the traits listed above, there are a few objective details that are hard to miss, making it easier for you to determine a comic’s current state. A few of these flaws include:

Some pawn shops will put flawed comic books through a restoration process in an attempt to fix up any blemishes. This can include retouching color, sealing up tears, reinforcing weak spots, re-glossing the cover, and so on. Some of these corrections may be difficult to spot, but if that doesn’t bother you then that’s perfectly fine. In the end, it’s up to you and what you’d like to see in your personal collection.

Now that you have a general idea of what to look out for, you can point out these details when inspecting comic books that you’re interested in buying in case you feel like the pawnbroker is asking too much.

Will My Local Pawn Shop Have Comic Books?

No two pawn shops are alike, and so you never know if you’ll find comic books until you walk in. Typically, a pawn shop’s inventory falls in line with what’s popular in the community. A store closer to the woods with a lake might have more sporting gear while a store in the busy city is more likely to have comics. In the end, you never know until you go for a visit. However, with superheroes becoming more mainstream with movies and shows reaching new heights, it’s very likely that comic books will increase in popularity along with the hype.

Comic book collectors would rather sell their issues in person rather than using classifieds online in order to completely avoid the hassles of getting scammed. Plus, there’s the added time that comes with finding the right buyer and having to ship it out. It’s much faster and easier to swing by a pawn shop and take the cash, and so there’s a higher chance of seeing comic books at these stores.

Why Not Go to a Comic Book Store?

With the existence of specialized comic book stores, why not buy from there? Comic book stores stay in business by selling the newest and most recent titles in bulk for just a few bucks each to those who are looking to keep up with current storylines. In that aspect, it’s the better option. However, pawn shops are better for collecting more rare pieces. Pawn shops are for valuables, and that includes comic books that go for a higher price than new issues due to their special characteristics.

The Best Pawn Shop in Azusa

Where is the best place in Azusa to look for rare and collectible comic books? Azusa Pawn is the best pawn shop in the area dealing in anything of value, including comics. You can even take a look at the online store to see if there’s an issue that’ll fit nicely in your collection. Since people are constantly running in and out every day, it’s in your best interest to check the store regularly so you don’t miss out on that special comic you’ve been waiting for.

Azusa Pawn is open seven days a week at 1028 West Gladstone Street in Azusa, California. You can call (626) 334-2274 any time for all of your inquiries including updates to our comic book stock.

Epilepsy Safe Mode
Dampens color and removes blinks
This mode enables people with epilepsy to use the website safely by eliminating the risk of seizures that result from flashing or blinking animations and risky color combinations.
Visually Impaired Mode
Improves website's visuals
This mode adjusts the website for the convenience of users with visual impairments such as Degrading Eyesight, Tunnel Vision, Cataract, Glaucoma, and others.
Cognitive Disability Mode
Helps to focus on specific content
This mode provides different assistive options to help users with cognitive impairments such as Dyslexia, Autism, CVA, and others, to focus on the essential elements of the website more easily.
ADHD Friendly Mode
Reduces distractions and improve focus
This mode helps users with ADHD and Neurodevelopmental disorders to read, browse, and focus on the main website elements more easily while significantly reducing distractions.
Blindness Mode
Allows using the site with your screen-reader
This mode configures the website to be compatible with screen-readers such as JAWS, NVDA, VoiceOver, and TalkBack. A screen-reader is software for blind users that is installed on a computer and smartphone, and websites must be compatible with it.

We firmly believe that the internet should be available and accessible to anyone, and are committed to providing a website that is accessible to the widest possible audience, regardless of circumstance and ability.

To fulfill this, we aim to adhere as strictly as possible to the World Wide Web Consortium’s (W3C) Web Content Accessibility Guidelines 2.1 (WCAG 2.1) at the AA level. These guidelines explain how to make web content accessible to people with a wide array of disabilities. Complying with those guidelines helps us ensure that the website is accessible to all people: blind people, people with motor impairments, visual impairment, cognitive disabilities, and more.

This website utilizes various technologies that are meant to make it as accessible as possible at all times. We utilize an accessibility interface that allows persons with specific disabilities to adjust the website’s UI (user interface) and design it to their personal needs.

Additionally, the website utilizes an AI-based application that runs in the background and optimizes its accessibility level constantly. This application remediates the website’s HTML, adapts Its functionality and behavior for screen-readers used by the blind users, and for keyboard functions used by individuals with motor impairments.

If you’ve found a malfunction or have ideas for improvement, we’ll be happy to hear from you. You can reach out to the website’s operators by using the following email

Our website implements the ARIA attributes (Accessible Rich Internet Applications) technique, alongside various different behavioral changes, to ensure blind users visiting with screen-readers are able to read, comprehend, and enjoy the website’s functions. As soon as a user with a screen-reader enters your site, they immediately receive a prompt to enter the Screen-Reader Profile so they can browse and operate your site effectively. Here’s how our website covers some of the most important screen-reader requirements, alongside console screenshots of code examples:

We aim to support the widest array of browsers and assistive technologies as possible, so our users can choose the best fitting tools for them, with as few limitations as possible. Therefore, we have worked very hard to be able to support all major systems that comprise over 95% of the user market share including Google Chrome, Mozilla Firefox, Apple Safari, Opera and Microsoft Edge, JAWS and NVDA (screen readers), both for Windows and for MAC users.

Despite our very best efforts to allow anybody to adjust the website to their needs, there may still be pages or sections that are not fully accessible, are in the process of becoming accessible, or are lacking an adequate technological solution to make them accessible. Still, we are continually improving our accessibility, adding, updating and improving its options and features, and developing and adopting new technologies. All this is meant to reach the optimal level of accessibility, following technological advancements. For any assistance, please reach out to